Our final ‘Meet the Family’ of 2019 features Bohlee Kim and her mother Jinyoung Kim.

Bohlee Kim, with a pretty smile that comes up all the way to her nose, is 26 years old. Although she has a visual impairment, she loves to draw. She loves to draw so much that she has been taking art classes. Bohlee chooses colors carefully by touching the palette’s paints by hand and then draws alongside the teacher’s detailed explanation, all with a happy expression throughout the art class. Every time a drawing is completed, you can see the smile of happiness across Bohlee’s face. 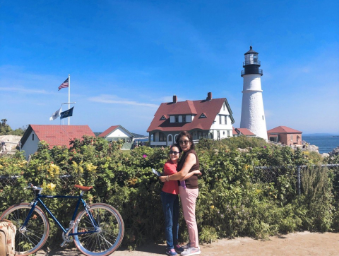 Bohlee also has another talent in singing. At her middle school and high school graduation, she sang as a representative of the graduates. With this talent, her dream is to be a singer in Hollywood. The songs that she has been listening to a lot lately are, ‘Can you see’ by Fifth Harmony and ‘Unapologetically’ by Kelsea Ballerini.

Bohlee, who is active in all she does, has overcome many difficulties with a loving heart, bright personality, and a special strength in facing visual impairment. However, recently she has had a hard time losing her sight completely. Now, she is ready to face the world with courage with the support of her family who believes that Bohlee will overcome anything.

This is a wish from Bohlee’s mother:

“There are many children with disabilities, but it’s true that programs especially for children who are visually impaired are so poor. I hope that more and more young people can get together to make friends, and design their own future together. I hope that CIDA will grow into a more solid organization to fulfill this desire and I am willing to join this path alongside CIDA. Thank you.”

CIDA also supports the family of Bohlee too!